I was stunned, tickled to death and pretty happy this morning when I saw a 232.8 staring me in the face when I weighed in.  Last night I weighed in at an even 233.0 and was amazed because of all the eating I’d done during my DC trip this past weekend.  Last night we had relatives stop by from out of town and we went out very late to eat & socialize and I ate PLENTY.  I had a snapshot of my 233 weight and half expected to use that weight because it seemed representative of where I was but thought I’d check my weight this morning and was a whole 0.2 tenths lighter 🙂 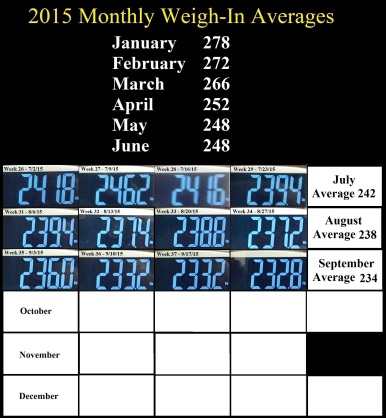 For the month, I’m at 70 miles and need 30 more to hit my 100 miles so there’s plenty of running left and I’m thinking I have a very good chance of seeing my weight dip into the 220s in October with a decent chance of having an average weight in the 220s for October.

My #1 priority is my Running Streak.  #2 is hitting 100 miles per month.  A distant 3rd was increasing mileage by 10 miles per month for 6 months to earn a rarely earned badge on SmashRun.com.  I have found it interesting that I think of these things mainly in terms of priorities as opposed to goals and while these things are priorities specific to my running it made me wonder what my priorities were in my life in general.  This is where things get a bit hazy.  There’s a plethora of other things in my life, so many items that I can’t hold them all in my head at the same time.  I might be able to jot out 4-6 bigger items but more will come to mind given time and only a list or my calendar can help me keep everything straight.

Having said that, I think dropping weight to a healthy and perhaps a visually pleasing level is one of the top priorities in my life right now.  Kind of nebulous, ephemeral and not so clearly defined as a priority in my life.  I wonder if I were to rank the priorities in my life and if my health, specifically my weight was the #1 priority if I could achieve greater results.  This may be a concept ball which needs to bounce around in my brain more before I have any final conclusions.  I may say that family, friends and people would be a bigger priority but, in a way – taking care of myself could be considered a means of respect and love for those I care about because I would assume that people I care about reciprocate and care about me.

I think I can use extremes to help with this point.  If I were strung out on drugs, getting high everyday and always drunk then the people who care about me would be distressed but if I’m at the opposite end of that spectrum and doing well then I would be removed as a source of stress in their lives.  Perhaps at the other end of that spectrum lays hope and inspiration …a much better scenario.

I think of a quote attributed to Padmisambha

I think my train is headed in the right direction.  I’m slow to want to speed up the train or alter its course.  Patience and time are great allies now.  Some people make weight loss and their health a priority via surgery which is a huge decision but also one that represents one of their priorities in life.  My venue consist of running, running every day, hitting 100 miles per month and keeping very little food in my home.  If those efforts take precedence over other areas of my life then I may conclude my physical condition is a priority and supersedes other aspects of my life however important those other aspects may be.

I suppose today’s blog, up to this point is mainly clearing out, organizing, clarifying and cleaning up any clutter in the attic of my mind.  Which …now leaves me little time left to cover my Washington DC topic but I’ll do the best I can 🙂

One thing is pretty certain – I’m going back 🙂  I’ve heard back from the race directors of the Navy/AirForce Half (NAFHALF) that a permit has been submitted for Sunday, September 18, 2016 and I’ve already checked on hotels and found a very appropriate one in the Pentagon City area which includes free shuttle service to & from the airport and is only 1 1/2 blocks from the Metro.

I’ve got a couple pictures from my run and have noticed two things about them.  My gait is much better than pictures from the Lincoln Presidential half marathon last year where I was shuffling along and it also appears that I could still stand to drop some weight. 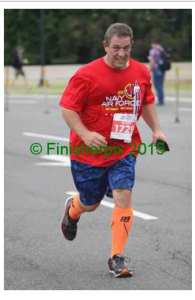 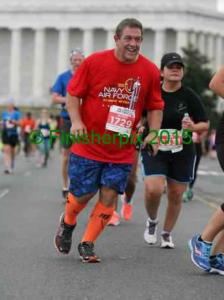 Something else I’ve learned in the past couple months is I don’t think I ran any half marathons prior to 2007.  I did full marathons in 1994 and in 2004 but have no record of any half marathons until 13 years after my first full.  As such, I don’t have any spectacular race times for my half marathons.  I really wish I could find data on my first full marathon.  I finished that one in approximately four and a half hours.  The first 20 miles were non-stop running at single digit minutes per mile so I would guess maybe a sub 2 hour half but have no data to support that guess.  The last 6 miles consisted of stopping every couple blocks to squat down so I could keep moving my legs.

Regardless, I’ve still pushed the clock back by beating my best time from 2007.  My time is up here.  I’m thinking next year I’m going to crush the time I got this year.  🙂